Yes, it’s that time of year again – 20 years ago, a journalist, Mary Schmich, on the way to work saw a young woman with her face tilted towards the May sunlight and thought “I hope she’s wearing sunscreen…” and went on to write an article based on the life advice she would give, if she were asked to give a commencement speech at College (at that point, she was 43 herself).

The article was printed as usual, but unusually, someone posted it on the internet without Mary’s byline and it became an internet sensation, with Baz Luhrmann making it into this musical hit the following year.  Thankfully, the writer was track 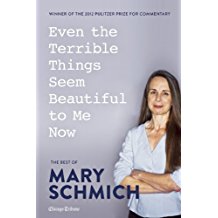 ed down and royalties now go to Mary Schmich.  Her decades of journalism won her the Pulitzer prize for commentary in 2012.  In 2013, her writings were gathered into a substantial book (over 300 pages) of quick to read articles, “Even the Terrible Things Seem Beautiful to Me Now”, by Agate Publishing – it is still in print.

Interestingly, she published the original article under the title “Advice, like youth, probably just wasted on the young.”  Today, she still receives emails from people who were inspired by what she wrote – “fuelled by coffee and M&Ms”.

Incidentally, one of the lines in the article is wrongly ascribed to Eleanor Roosevelt (I have a much-cherished greetings card to prove it) – but it was an original comment by Mary:

“Do one thing every day which scares you”

Through writing the article, Mary came to realize what her life lessons would be – and it was such a positive experience that she encouraged her readers to sit down and write out theirs.  What have you learned?  What wisdom would you pass on, to a younger generation?