THE chocolate cake with cigarrillos 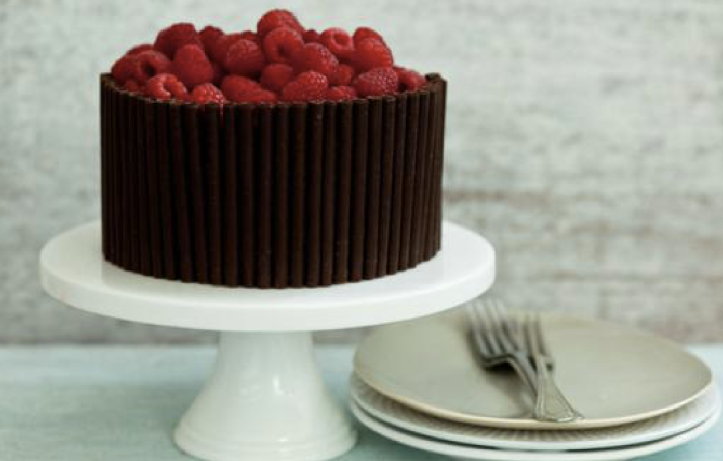 From the moment I watched “Baking is Easy” It could only be a matter of time till I attempted to bake the lavish chocolate cake piled with raspberries and framed with cigarrilloes…. it looked wildly impressive, frivolous and colourful, had expensive ingredients, was unusual, involved multiple stages of making, and was well outside my range of skills and tools. Typical. When I open a new book on cookery/bakery/knitting/photography/crafts, I can’t see the opening chapters of useful everyday projects because my eyes are fixated on something fiendishly difficult on page 171 that would bring tears to the eyes of a professional.

And so, the urge to make The Cake grew upon me, like Some Thing which grows.

My enthusiasm sagged slightly in the supermarket when I saw the cost of some of the ingredients: raspberries a mere £1.99 per punnet and I needed TWO. Chocolate fingers as a substitute for cigarrilloes – again nearly £2 a box and I guessed I needed TWO….. But by now, cool-eyed logic was gone, and I was in the grip of a fervent compulsion.

Unusually for me, I put out all the ingredients first on the work surface (usually I’m up to my elbows in flour when I discover a key ingredient is missing) – so I knew I had the stuff. I hopefully set the oven temperature, although I know that it’s as accurate as a melting icecream in sunshine – and resolved to try and sidestep its evil overcooking ploy by cooking for the shorter recommended time. Aha!

Cake mix – unbelievably simple. There seems to be more coccoa in the mix than normal, because the chocolate ‘hit’ in the nostrils was more powerful than I get from my usual Chocolate cake mix. So far so good. Into the oven “for 30-40 minutes”. Right, so that would be 30, knowing my evil oven. But the moment I opened the door after 30 minutes, I saw a slight wobble on the top of the cake, and closed the door again. I rechecked at 5 minute intervals and finally, after 45 minutes, the magical skewer came out clean and lo and behold, the usual sign of cooking was right there – the sides were slightly burnt. There are baking standards – and mine are fortunately below perfect. At this point, the most important fact was I was certain it wasn’t going to give anyone raw food poisoning.

I set to, to make the buttercream icing. The recipe wanted softened butter, I used room temperature butter, and attempted to add the icing sugar while holding a teatowel over the mixer. That brief statement made it sound simple but, as in so much with baking, there is a knack to it. And if you don’t use that knack, it becomes difficult. No matter how loosely I held the teatowel, the revolving bowl tried to drag the towel into the revolving beaters and create a “what went wrong here” health and safety scenario. After varying my grip on the tea towel, some icing powder cunningly escaped and drifted onto the counter and floor. Not a vast quantity, just enough to be annoying.

The mixed buttercream wasn’t promising. It just looked like buttercrumbs. Surely it shouldn’t?

I checked the video of the make again – Lorraine’s icing not only had the consistency of softly whipped cream, she had also employed a cunning loose-handed grip on teatowel and revolving bowl rim at the same time and spilt nary a drop of icing sugar. So why did I have buttercrumbs? Not enough liquidity? Possibly the butter hadn’t been warmed enough? I microwaved it a little, added a little more butter for liquidity and finally the melted chocolate. Well, it got a little gritty, quite probably overbeaten (?) but at least it was spreadable. I’ll have to sort out that problem for next time.

Then it was time to cut the cake – horizonally, in half. Lorraine Pascale had a neat revolving cake stand for this, whereas I revolved the cake by hand on a flat surface, slicing it before my brain realised the disaster potential. For the icing, Lorraine had a cake base, the revolving cake stand (which was looking more useful by the minute) and a large palette knife. My local supermarket had kind of knife for cutting food but not even a tiny palette one I could purchase – so I was working with a serving plate and a spatula.

Because I was icing with basic tools, the cake was less than perfectly round in shape once covered with icing. Once again, I suspect that a knack and constant practice is what’s really needed here.

Now for the side decoration of the chocolate fingers. Firstly, I would say that on the BBC Good Food website, the chef does say that chocolate fingers are acceptable as an instant substitute for those who don’t have time to order cigarrilloes – she may as well have looked directly to camera and said “especially those of you who get compulsive urges to bake a difficult thing NOW and are undeterred by lacking the right tools or brain”. However, the two boxes of chocolate fingers were not Quite enough to go round the circumference of the cake (boo) and they do look reminiscent of a Fort shaped birthday cake for a child. So not at all the same level of sophistication and finish as the original. I had assumed the cigarilloes would be hideously expensive but probably not much worse than the chocolate fingers. I should at least have bought Bournville fingers, richer look and taste.

Finally, the 2 raspberry punnets. Again, these were just about enough to cover most of the cake’s top and give a little pile in the centre – but for a properly luxuriant covering I’d suggest you need two and a half. At £2 a punnet, I think I’ll relegate this to being a summer cake and hope the fruit is cheaper in season. I’d also consider sourcing from a local market/shop rather than supermarket.

However, the cake looked well, in a slightly more amateurish way than the polished perfection of the cake on TV. It certainly looked better than my usual homely aesthetic of buttercreamed small chocolate cake with Smarties on top.

And it cut like a dream. It is a cake which looks like it has Presence and does not disappoint once sliced. The cake took the cut accurately an 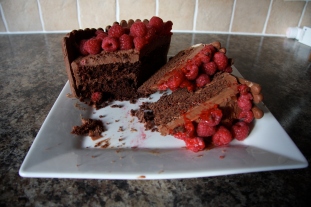 d cleanly, without the whole edifice splodging or the cake layers splitting on the plate, and the chocolate fingers behaved well and mostly remained stuck to the edge. The icing was made with 70% chocolate, normally too rich and dark an ingredient for this household – but it went fine. And thefreshness of the raspberries, although hideously expensive, was perfect to cut through the unctiousness. But it is party food – as an 8 inch cake it cuts at least 16 plus slices.

Recipe and video of how it should be made over at BBC Good food website: