This article is a mashup of two different images encountered within 24 hours – which have no business being together, other than in my mind.

Yesterday, I saw Kirsten Carlson’s cyanometer appearing in a Twitter photo which grabbed my attention.  Researching this, and her work with Schmidt Ocean Institute on the colour of the sea and sky (see here) led to finding her video of drawing underwater – yesterday’s blog post.  Over days at sea, Kirsten used the cyanometer to make observations – the cyanometer being a circle of painted blues invented in the 1700s by a swiss scientist to judge the colour of sky – later used by Alexander von Humboldt to measure the blueness of both sky and sea.  (It is in a series of gradations of Prussian Blue). 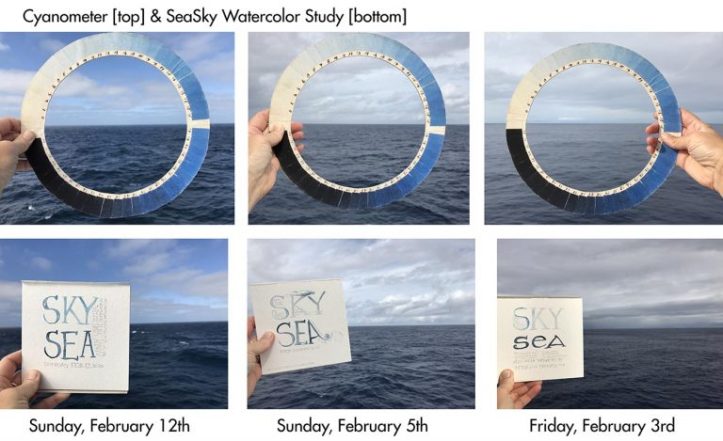 Today, I came across a series of images from a book on Matisse (“Matisse and Decoration” by John Klein) via notes on an audio podcast. I continue to marvel at the range of incoming news, pictures, information and inspiration on the blogosphere.  (No doubt somebody, somewhere, has make a podcast or blogpost on the question of “Can You hear colour?”).  Matisse is one of my favourite artists, and therefore I am always looking for ways to drag him into this conversation – if you type his name into the search box on this blog, you’ll see what I mean.

Matisse, like Kirsten Carlson, dived to draw what he saw underwater, entranced by the shapes and lifeforms.  Sixteen years later, in his wheelchair or bedridden, he made those memories into massive collages, with which he covered the walls of rooms in his house, so the whole effect was of being underwater.

When is the right time to make art?

Stuck often in his bedroom for long spells, he cut out a piece of paper to cover a dirty mark on the wallpaper – then another shape – then another, eventually making the two large murals of Oceania.

Oh this late afternoon Autumn light - bright beauty falls in tiny spaces. This is just a kitchen cabinet, but am entranced by the shadows. #light #shadow #photo
Ach, the puir wee haggis!
The beauty salon that invited you not to judge on outward appearances ... (check is signage) #itsasign #graphicfail #Edinburgh
That moment when the lift announces your floor, "Doors opening" - but nothing happens except a dull 'thunk'. That. Outfoxed it by pressing lower floor - where it condescended to open the doors, content that I wd now have to walk upstairs.#hhgttg #douglasadams
Rereading "Pride and Prejudice" as I prepare my 2 hr creative writing workshop/event for Jane Austen fans.... coming November, deets soon - it will be online so available worldwide #JaneAusten #creativewriting #workshop #online
en route to Ballymaloe Fried Rice.... The slow boat to China via Ireland, I guess:-) Due to dock on 15 mins...