Get past the fear block to freedom (20 mins)

“Fear and envy will keep you on the sidelines”

This is an extraordinary video: 20 minutes of a woman talking about her paralysing fear of public speaking – while doing it.  Honest.  Encouraging.  She’s speaking to a roomful of creative people, at the AIGA (American Institute of Graphic Arts) conference, 2015.  Then there’s 10 minutes of questions with the conference moderator, Roman Mars, who is also very engaging.

“If we don’t risk, we don’t get anywhere.  Fear of risk is terrible.”

“Vulnerability is where creativity lives – and I think it’s where we practice our best bravery.”

Her fear of public speaking was such that, given a leadership development course which involved a 2 minute speaking presentation to 46 senior executives, she seriously considered giving up the job which she loved and had practiced for 16 years.  (She works at Capitol Radio, on visuals and direct print campaigns for new singers and has collaborated with Gwen Stefani, 50 cent, Annie Lennox, Beck, Katy Perry.)
However, she realized that her paralysing fear was truly holding her back, and that she was going to keep facing it again and again until she had to deal with it.

“I’d had enough of letting fear decide what opportunities I could and couldn’t take.”

So she spoke to a colleague – who suggested a public speaking coach – and she then worked with the coach for FOUR MONTHS – so that she could speak publicly for 2 minutes.  This involved – horrors – being filmed on video, speaking.  The first 3 times, Nicole was “literally backing out of the room as she was filming me”.

“If you can move fear out of your way, just a little bit, growth an opportunity just come to you – it’s amazing.” 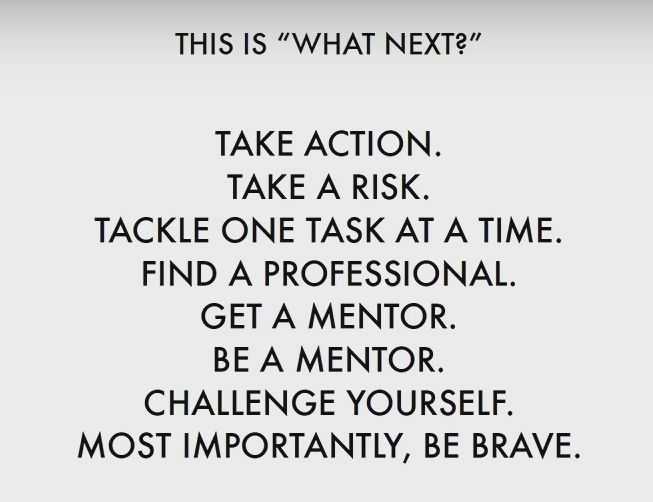