Phil Lord and Chris Miller, screenwriters or producers on such diverse projects as “The Lego Movie”, “21 Jump Street”, “Cloudy with a chance of Meatballs”, TV’s “How I met your Mother” (3 episodes), “The Lego Batman movie“…. give a masterclass on screenwriting and producing.  They break it up really well.  So although they speak for 53 minutes, they’re worth hearing.

They have a relaxed way of presenting together, bring in some crazy fun but over and over again repeat that they’re obsessive about making every tiny part of their projects absolutely brilliant – refusing to settle for merely excellent.  As the presentation continues, and this is repeated, you realise that they are speaking truly. 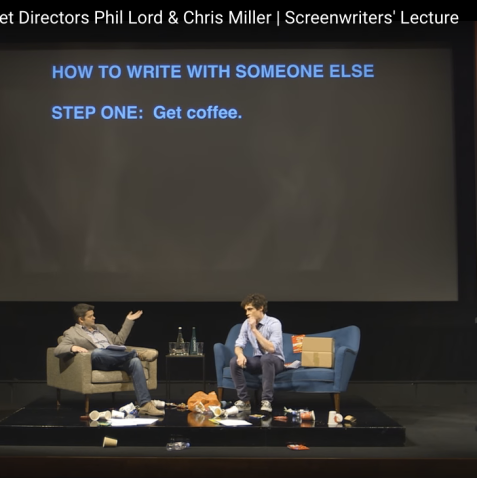 They speak for under an hour – and then there is a further 30 minutes of questions and answers – which are good – so worth setting aside the full one hour and a half to watch in its entirety.  They are amusing, honest about early failures and difficulties and how they won through was – no surprise, folks – lots of hard work.  They write and rewrite and rewrite and tweak and rewrite, show to friends, rewrite.

One tip which came across clearly was to show your script to other people – no matter who they are in the studio pecking order or whether they’re friends/family – they’re a person with an honest opinion – and as writer you should listen up, because you are too close to the project to see its flaws.  It’s humility – but it’s also good sense.

The two voices give variety to what is said, and there are plenty of illustrations and clips from their projects: 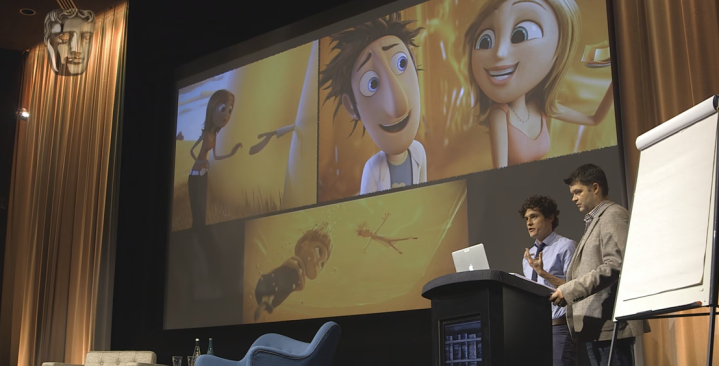 Along the way, they present their maths of working as a partnership:

half the money, twice the effort, twice the time = an output which is 1.3 times better!

They also lead the audience in a pledge to make work, and are adamant that all humans are creative, anyone can do the work they do but it is hard work, done repetitively.

What they’ve also learned along the way are, like all important learning, found through failure and near failure.  One vital lesson was learning to listen to other people’s feedback and recognise that making a film is a hugely collaborative venture.  Also, to recognise that even at the end, the film is actually ‘made’ in the imagination of the viewers.  And this is one reason given for really listening to someone/anyone who has an opinion on the work – because if they don’t get the story clearly, then likely the final paying punters will find it puzzling in the same way.

A film is about RELATIONSHIP not just CHARACTER.

This is a great insight – at one point, “Cloudy with Meatballs” was about a main character and a situation – it was funny but there wasn’t a real sense of involvement, until they made one of the characters the father of the hero – and the hero wanted to get his taciturn father’s approval.

If you want to be a screen writer, then watching this interview is a good thing to do – yes, it is long, but that gives enough time to talk pleasantly and with humour through the whole career process.

In fact, the whole series of “Genius” strand of masterclasses by BAFTA looks worth a checkout.  See them here.