David Bomberg currently has an exhibition at Pallant House, Chichester until 4 February 2018.  It then reopens at Laing Art Gallery, Newcastle-upon-Tyne  (17 February -27 May) before going on to the Ben Uri Gallery and Museum, London NW8 in the summer of 2018.  Bomberg drew and painted in a variety of styles throughout his life: 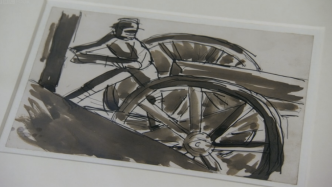 It’s difficult to believe that these pictures were all made by the same man.  But David Bomberg (1890-1957) is a vital artist, who didn’t stay in the same painting style – or indeed the same place – travelling from poverty in London to the First World War, to Jerusalem, to Spain, to London then Spain again.  Once again, we are looking at that period through and just after World War One, a hundred years ago, when so many writers and painter’s lives changes forever.

There’s a very clear and interesting brief 3 minutes video introduction to David Bomberg’s life and work by the curator of the current show, Rachel Dickson and Sarah MacDougall:

And for those who are seriously interested in finding out more, art historian Andrew Graham-Dixon has made a compelling one-hour documentary on the artist.  We learn of his connection with Sir John Singer Sargent, Sickert, The Slade School of Art and how Bomberg himself became an art tutor and affected the thinking and practice of the next generation of art-makers.  This programme is currently available to view if you live in Britain (and pay a TV licence fee) on BBC i-player here.  The title for the programme is: “David Bomberg: prophet in No Man’s Land”.  If outside the UK, sometimes you may find copies of BBC arts programmes uploaded to Youtube.

If you are a visual artist, look at Bomberg’s pictures, and pick one style very different from your own – try it!

This ice-pink Next sweatshirt has strange sleeves and weird ruching but I find this colour combo irresistible with a chestnut brown t-shirt. (and it's delectably soft)
The best tasting part of the cake..... #baking #fud
Light and colour; always inspiring
How long is a piece of string? Today, for next artwork, it's 16 inches. So now you know the answer if anyone asks you today:-)
Your recommendations sought! Am in search of new-to-me music. Especially either (a) raucous and exciting jazzy OR (b) instrumental and spacious (conducive to creative thinking).
Today's painting, inspired by Brice Marden, with added collage elements.