A sight for the ears – exhibition tie-in

Edinburgh, Scotland: Last night, I was at the book launch of a pamphlet book of poetry “Seen/Unseen” written in response to the artworks in an exhibition “Hidden Gems” at the City Art Centre, Edinburgh.

There was a brilliant turnout, in part due to the fact that there were 30 poets involved and most of them were there to read their poems.  Kate Hastie mc-ed the event, having curated the book and the writers – all like herself drawn from the Scottish Graduate School for Arts & Humanities.  Or, to put it another way, many doing Masters and PhDs in Literature or Writing.  And to put it another way, rather likely to be our next generation of published professional writers. 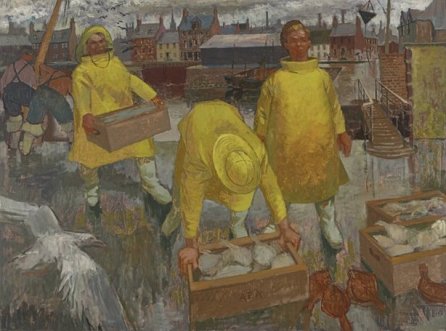 and also works by Jessie M King, Man Ray, R B Kitaj (The wonderfully named print “The Romance of the Civil Service”), Henry Moore and Frank Auerbach  Oddly enough, because they were writing before the exhibition was physically put together, the writers were working from digital images sent to their computers.  So instead of being Ekphrasis (a poem in response to the 3D physical presence of an artwork), Kate Hastie coined a new phrase to suggest the poems’ creation was maybe “Digiphrasis“.

(I attended a writing workshop by Kate, last weekend, to encourage writing in response to an artwork – see here for more details.  And I’ll be posting my own poem written at that workshop, shortly on this blog)

The range of poems read last night showed just how elastic the use of ekphrasis is.  Some poems described the picture, one was written by a woman who had just given birth (Lauren Pope) and who wrote mostly about her own confined environment with a new dependent, M G Richer wrote questions about what is a gentleman based on the assigned picture “Portrait of a gentleman”, some were prose poems, some the more traditional short lines layout, some imagined themselves as the person in the picture, others were musings on the picture, some were personal responses.

One of the outstanding examples of the personal view and reviewings came from Tawnya Renelle, who listed her responses to a picture by Lucien Pisarro (the surname may sound familiar – he was son of Impressionist Camille Pisarro).  Her poem was called “15 days and a meeting” – the poem numbered her various honest reactions to the poem over days, from trying to focus on parts of the painting, to becoming annoyed and bored with it, to re-engaging, and finally, her feeling on actually meeting the painting on the night of the reading: this was the delightful recognition of an old friend – an “oh there you are” feeling.  And because this was so spontaneous, Tawnya sat through the evening, writing her new last lines into each poetry book.  Therefore, if you purchase the book at the gift shop (£6) you will see some handwriting in it.  Tawnya is one to watch, I was left wanting to hear more of her work.

Some poems are “page poems” and you have to read them on the page slowly and carefully to appreciate their careful word construction and layout; others are poems to hear, because of the sound falling on the ears, the pleasure of the rhythm and tones.  Last night’s readings were a mixture.  I happened to be sitting beside a poetry reader, who had the new book and was following the readings in it, so I could glimpse the physical layout – and for some poems, especially the prose ones, that helped.  Personally, I think really good poems which are instantly intriguing and tend to be impactful and memorable – are a bit of both: wonderful to hear and rewarding reading on the page also.

Also worthy of note: Dana Little, Russell Jones, Ryan Vance and Agata Maslowska.  These are simply my opinion, others may chose differently.

Hannah Summer made a very interesting reading, but unfortunately tended to speak too quickly to be heard clearly.  I look forward to reading her poem in the book.

I think this was a brilliant opportunity for the writers to gain experience in reading and performing their work, in front of a sympathetic audience, mainly of their peers.  A few of the readers did not do their works justice because they spoke too quietly or made the classic rookie error of speaking faster because of nerves.  There is only one way to learn the craft of performing a poem – and that is to give more readings.

Simple recommendations for next time: the exhibition curator was present, it would have been very interesting to hear her comments at the end, as she heard so many responses to works she had chosen.  Also, the sound was not crystal clear.  And right at the start, it would have been a more pleasant welcome to have coat-racks for outdoor gear on a rainy night and someone serving as drinks pourer, with nibbles in bowls for easy access and presentation.

“Hidden Gems“ free exhibition continues at the City Art Centre, until 13 May 2018.

Gallery hours are: Wednesdays to Saturdays 10 am to 5 pm; Sundays noon to 5 pm

“Seen/Unseen” is purchasable at the Gallery Gift Shop, for £6

As art exhibition tie-ins go, this was genius.  When you put in all the hard work to curate and present a good exhibition, you will attract all the usual visual art aficionados.  But here, another wider audience was attracted – the many writers and their friends.  Of course, writers are often interested in visual arts and some would attend an exhibition anyhow – but with this event, they were given an active role to engage with an exhibition and use it as a prompt for their own writing practice.

Here are the gains from having an ekphrastic poetry book linked to an exhibition:

Readers of this blog will already know what this is – for the newcomers (welcome!) this is a section where I highlight some helpful tips from the post – ideas we can take away for our own creative practice.

If you’re curating an exhibition – consider commissioning some emerging poets to respond to works; a small number to perform at the exhibition launch, or a larger number to form a collective and self-publish (or e-publish if not enough funds)

If you write in a collective – contact a local gallery/museum to offer to write a response to an exhibition – if it’s an official tie-in, you obviously need to impress with your writing as a group – but remember, there is nothing to stop you writing unofficially as a response to the exhibition, as a writing exercise.  You could still pull that writing into any self-published work as a group, or individuals could use their poems to self-publicize in the usual way.