Classic Film: The Man with the Golden Arm

“The Man with the Golden Arm”, starring Frank Sinatra is just one of the very watchable classic black and white films available at the moment on streaming networks.  (Currently on Amazon Prime).

Watch it.  There’s a genuinely tense story – underscored by Elmer Bernstein’s music – which frankly would have a placid monk chewing his fingernails.  The key character in the film is an ex-Junkie just out of jail, trying to turn his life around by getting a job as a drummer – so the variety of percussion backgrounds is appropriate and gripping.  But that’s just the start of it: the list of complicating situations and relationships keeps the viewer spinning on her mental heels.

Frank Sinatra is a revelation in the main role: he can act.  So can everyone else – they all have meaty roles, interesting lines and motivations and they make them count.

The film earned 3 unsurprising Oscar nominations: Best Actor (Frank Sinatra is a powerful onscreen presence, running through a wide range of emotions), Best Score (Elmer Bernstein, as already said) and Best Art Direction black and white – you can see the immense details in the crummy lodging rooms, bar and street – all distinctive.  The character Molly lives in a tiny one-room flat but yet it looks believable and a truly lived-in space.  (At one point, there are nylons hanging up to dry – never referred to, but believably there).  Unfortunately, the film came away from the Oscars empty-handed, but certainly earned its nominations. 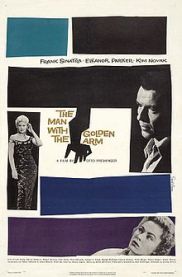 Saul Bass, uncredited, designed the title sequence – the first of many for major film directors.  He designed the logo of the jagged arm with its urgent lines, which Preminger insisted had to be part of the posters advertising the film.

He set a new style by his animated title sequence.  This is the film which launched his lifetime career in powerful film titles – going on to make title sequences “North by North West”, “Vertigo” and “Psycho” for Alfred Hitchcock.

By today’s standards, the on film depiction of addiction was fairly tame yet it’s still a suspenseful main theme in the film – but for its day, it was breaking entirely new ground. Because its theme was addiction, the film was not given a code for general release, but the Studios took the unusual step of showing it anyhow.  (Later earning a classification). This was the “Trainspotting” of its day.