The thesis of the exhibition is that Scottish artists were responding to the modern influences of European painting fast, through their own work and through courageous and daring exhibitions by SSA and RSA – responding much faster than heretofore thought, and often speedier than their English counterparts.

Beginning with the Scottish Colourists, Alice Strang pointed out that when J D Fergusson moved to Paris in 1907, his painting immediately changed – particularly his colour palette.  He was influenced by painters such as Picasso, whom he met and whose work he saw.  Fergusson was a link for other Scottish painting friends to also come across to Paris and see the new exciting ways of painting for themselves.

In displaying the above slide of Samuel John Peploe, 1912, “Tulips and Fruit” Alice Strang pointed out the influence of the lines filling in the coloured areas in the painting – like Van Gogh, whose work Peploe would have seen.  (I also felt that the strong lines were like woodblock lines within a print).

The Futurists were an influence on Scottish artists, with Stanley Cursiter seeing the first exhibition of Futurist paintings in the UK, in London – and choosing to exhibit two of them, alongside his own painting in the 1913 SSA exhibition.  We were given an opportunity to see the delightful play of light and fragmented viewings so beloved of Cubism, in his picture “Rain on Princes Street”.  (It was especially appropriate to be viewing this within a stone’s throw of Princes Street itself.)

As well as showing how Modernist art movements in France affected styles of painting and sculpture, we were shown how the paintings themselves reflected real places (in Edinburgh) by studying a photograph of a particular street location at the time, then flipping on to the next slide to show the painting of the same location.

Among the interesting evidences for Scotland being more advanced in its art than previously thought, Alice revealed that the first Edvard Munch exhibition in the UK took place in Edinburgh, in 1931.  In this decade, Edinburgh was awash with educators invested in forwarding new and exciting art styles: Hubert Wellington (Principal of Edinburgh College of Art), Herbert Read (Art Historian and Professor of the Fine Arts at Edinburgh University, 1931-33), and Stanley Cursitor (who was Director of the National Galleries).

Among the many artists featured in the exhibition are names I’ll need to investigate further, I was busy scribbling them down: James Nigel Mcisaac, Tom Pow (inspired by Braque), Thomas W Whalen, William Crosbie, William Crozier, William Johnstone, Keith Henderson, Benno Schotz in sculpture and sisters Anna and Doris Zinkeisen.

The one hour talk was generously jampacked with references, intriguing digital slides and local information from the curator as to the size of the actual artworks in comparison to the size they displayed on the screen.  As a starter, it definitely left you wanting more, and I look forward to exploring the exhibition itself, soon. 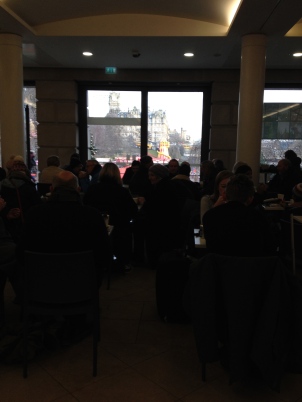 Funnily enough, with a touch of the sublime to the ridiculous, as I emerged from the dark interior of the Hawthornden Lecture room, right in front, through the glass windows was a view of the funfair which has sprung up in Edinburgh for the duration of the Christmas holidays: a bold yellow and red helter-skelter.  I have a sneaky feeling that the modern artists we’d been hearing about would have loved this circus-like brashness, juxtaposition, colour and movement.

And a final note of how life meets art – I was meeting a friend immediately after the lecture, in the Portrait Gallery.  While we were talking, my eye kept wandering to one portrait on the wall of the dining-room.  In writing up this blog post, I’ve just discovered its likely to be this portrait by the painter…. McIsaac, one of my new names to investigate!