Exhibition Review: “I want to be a machine” Paolozzi & Andy Warhol – Edinburgh

I visited this exhibition on the first day of its opening, in November 2018 (it runs until June 2019).  Generously, there was a free lecture (see pics below) on day one, in the middle of the day, at the National Gallery on the Mound.  Then you could hop on the link bus which drives out to the Modern Gallery.  (Free but £1 donation each way is quietly requested).

Anna Massey explaining how Paolozzi was part of the ICA movement 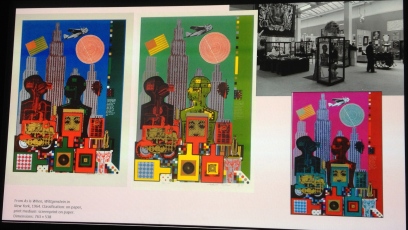 It feels like two separate exhibitions – there are very few links

Once you grasp that, your brain can stop trying to look for connections and enjoy the separate shows.  The exhibition is a game of two halves.

In Modern 2, Rooms 1 and 2 showcase Andy Warhol’s work, on the linked landing to rooms 3 and 4 (Paolozzi), both artist’s timelines are shown one above the other, not intermingled,

Best part of the Exhibition?

I think by far the best room for me was the final one, Room 5, downstairs, which has Paolozzi’s reconstructed studio (actually 2 studios in one), film posters of Andy Warhol’s productions (mostly produced rather than directed) – and a small bench facing a large TV showing three excellent video films by Bright Sparks in connection with the National Galleries.  Here’s one of them, for a sample: “What is Pop Art?”

These films are wonderful introductions to each artist separately (sigh!) and to the topic of Pop Art.  I would recommend beginning a visit to the Exhibition by looking at these films and into the chaos and fascination of Paolozzi’s studio/mind.

Strengths of the Exhibition

I’ve seen a few pieces of Warhol’s art, in the permanent collection at Tate Modern, ten years ago, so his work is not entirely new to me.  (There, I was blown away by a recording of his voice, planning the nitty gritty logistics of his protegee band, “The Velvet Underground” – should they get a van?)

In this current exhibition, I appreciate:

a fantastic sentence in the explanatory text “Collage is a supremely twentieth-century technique, providing an analogue to the way we switch television channels or flick through magazines, past articles and advertisements dealing with all sorts of subjects”.

Small weaknesses in the Exhibition (on day one)

The show is a great opportunity to see two major modern artists’ work upclose.  It must be a great boon to art students to study them, and both were so prolific that any joint exhibition is always going to feel a little crushed and restricted.  However, I should revisit it soon – if the typos and music level have been adjusted, the whole exhibition will be raised a level.  And perhaps if I cross the road to Modern One, their excellent bookshop will have a good book on Paolozzi or Warhol, to compensate for the tiny catalogue.