A day with Sue Perkins

I went to buy something to read for a coffee break – only to find today’s newspapers were so expensive (and seemed determined to list the gorey details of human atrocities or wring their hands over the state of the world) – and magazines were expensive and full of adverts…. that it seemed better value for money and good mental health, today, to buy a book.  Less than £4 for the collected memories and joke 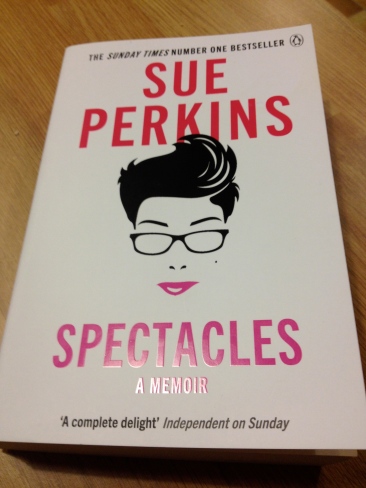 ry of Sue Perkins, comedy partner of Mel Giedroyc (together they presented the Great British Bake Off in its BBC incarnation.)

Sue amuses.  Her way of describing her family is affectionate but hilarious. It is not a book to read in public unless you truly enjoy shouting with laughter and having everyone turn their head and want to know why you’re screaming.

e.g.1: one evening, when Mel&Sue don’t have a sound/lighting engineer, they dubiously trust Sue’s brother, David, to help their act.  Immediately it’s time for them to come onstage, he turns up the house lights, and plunges the stage into darkness.

“A spotlight came on, stage left.  Finally!  We walked towards it.  The moment we started to feel the heat of it, it flicked off again, only to reappear on the other side of the stage.  So we turned around and walked across.  The same thing happened.  We began chasing visibility.  For the next hour we went on a voyage of audio-visual discovery: sometimes we’d get a high-decibel burst of incongruous sound effect – a lion roaring, a juicy fart, some cicadas in the bush.  Sometimes we would be squashed into a pinprick of light at the very back of the stage, desperate to be seen for at least a small percentage of the show.”

e.g. 2: “If Mum makes herself feel safe by hoarding things, then Dad gets his sense of security from shedding them.”  (A brief and portentous introduction to the nature of life with her much loved parents)

And the key scene where they are due to catch the overnight bus to Edinburgh for their first Festival gig…. but the trains don’t materialize for Sue and so she sends a frantic station announcement message to Mel in the bus station to keep the bus waiting.  (This is in the days before mobiles)

e.g. 3: “You’ve never known true pain until you’ve heard a disincentivized transportation worker try to pronounce a Polish surname (before Poles were familiar visitors to our shores) over a public address system late at night.  It was like someone firing vowels at a wall…

[Finally going for it]  “Will Mel Gee-eye-ay-ee-dee-roo-oooo-eeeck come to the information desk immediately.’

Finally, deducing that the only person on the concourse with a name even close to that being mangled was her, Mel approached the desk…..”

The book is a fast read – it reads conversationally, like written down standup.  You can distinctively hear Sue’s voice.  If you like her humour and delivery, you’ll like the book. Be aware that the humour often has adult themes.

Priced so low, I obviously bought the book in a supermarket with very little elves.  I have made peace with my conscience by buying books where I see it displayed: if in a local independent bookshop, I buy it there.  If I come across it online, I buy it there.  In this way I don’t give up supporting local bookshops.  And when I say supporting indie bookshops – I only have to handle a book to feel an urge to buy it – so they do pretty well out of me once I cross the threshold.