Stephen Be: life, creativity and knitting

This video interview with colourful knitting designer, Stephen Be, is just too much fun not to watch.  (As it says at the start, the wonderful interviewer, Kristy Glass, apologizes that the first half of the interview was in poor focus – but such good content she had to keep it – so she funkified it up with a variety of visual effects until the good focus kicked in at 13 minutes in.)

Stephen is famous for knitting with glitter or chunky wool – and mixing it up.  He demonstrates the same chunky “ponchino” (a poncho with only one diagonal point, not the usual two found in a poncho) – worn 3 ways: 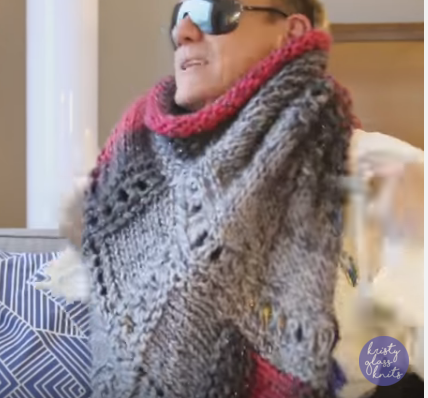 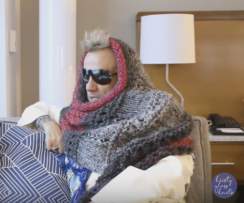 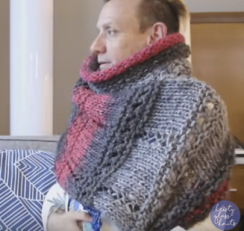 Minnesota, autumn, over one shoulder

“My philosophy is: a pattern is a guideline only” – Stephen Be

Your passion shows at an early age: Aged 8, Stephen Be was making outfits for Barbie dolls, buying shoes, handbag and hat to accessorise, adding a sketch of a scene as vignette – and SELLING the entire outfits to all the girls in the neighbourhood, for their dolls.  So he was designing and merchandising.  What were you naturally obsessed with, or enjoying, in primary school?

You may go through different cycles in life, don’t feel stuck in the one way.  Stephen calls it his Marilyn Monroe effect – the 7 year itch – needing to change things up from time to time. 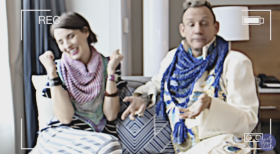 When you’re feeling mixed up, listen to the advice of someone who knows and loves you – twice, Stephen came home to Mom and started again with her advice, after things not working out in New York, and later unhappiness as a very wealthy, successful but too commercial designer

If you’re creative, your work IS your c.v.   He turned up for a job interview without a cv, as he didn’t know how to do that – but with 2 suitcases of his knitwear – he got the job

For creative people, being confident in presenting yourself verbally is your natural birthright – he comments, offhand that he’s creative, he can present himself and get work.

Guideline – go creative with patterns you see – deliberately knit in different textured wool and colourways.  Stephen keeps it interesting by always knitting with two or three yarns. (Obviously, for resizing wool or needles, you need to develop in skill and experience on unfitted garments, say knitted squares or scarf, so the fit is still good).