Stevenson painted lively portraits of strong women as she read from her book of poems about Scottish Women, in the richly adorned historic central room of the Scottish Portrait Gallery.  In a brilliant mix of place, voice and performance, she read from her book, telling us about the Loch Ness Monster, local scientist, Mary Queen of Scots forced to abdicate her throne the day after giving birth to stillborn twins (consider the cruelty of that), Isobel Wylie Hutchison, the dancer Moira Shearer (in a conversation between two pairs of her shoes), mathematician and astronomer Mary Somerville (1780-1872) who has an island in the Arctic and a crater on the moon named after her…….. (as you do). 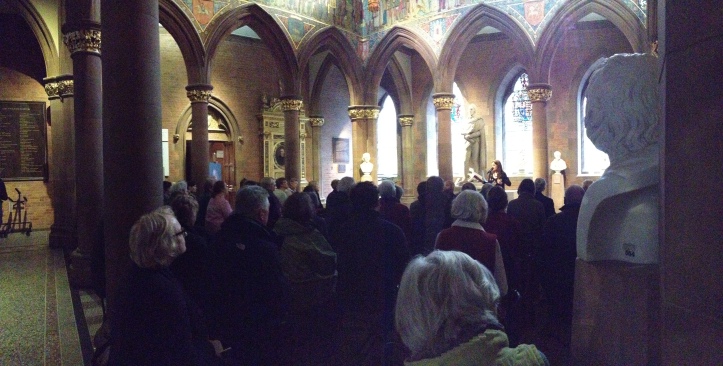 Performing her works to a packed crowd, Gerda was able to speak the Scots dialect in such a way as to make immediate sense even to those of us not born and raised in Scotland.  (About a quarter of the poems in her book are in Scots, but there is a good Scots vocabulary list at the back).

The characters she has written about in her book “Quines – Poems in Tribute to women of Scotland”  – are a broad range of backgrounds, life experiences, different talents and interests – usually in very challenging situations – but responding admirably.  Each talented life has its darkness and obstacles to overcome in life – and after their death, most lapsed into obscurity.  Gerda’s poetry brings them back into our vision, drawing on what is obviously good research to find an interesting story and way into understanding the character.

The book “Quines…” was just published last year but has had to be reprinted this year.

At the Q&A section in the reading, I asked

Were there some other women who you would have liked to cover but you didn’t have space or that you have bubbling at the back of your mind to cover?

The poet’s answer is encouraging – there are two women she has already written poems to celebrate, outside the book, so there’s a start on further writing…

Professor Elizabeth Meehan – first women Professor of Law in Ireland and part of the Women’s Coalition which took part in the Good Friday Agreement.

Helen Crummy – founder of Craigmillar Festival which has given arts/music opportunities to children and communities.

Recommended: this is a good book to buy either because you love to celebrate lives well lived, you enjoy biography and poetry, you have a sense of Scottish history or wish to find out, if you are interested in people who deserve to be famous, if you admire pioneers, if you find that other people’s courage and sheer dogged trying encourages your own…. (pretty much everybody)

Usually on this blog, we end a post with an idea from the featured maker which we might usefully take away and plug into our own creative making.  Here’s today’s:

When you display your pictures, photographs, poems – whichever artform you follow – if you exhibit or hold a launch event, carefully scout for the perfect location – where the place will be in conversation with the artworks.  The Scottish Portrait Gallery was the perfect space for reading poems of women’s lives which radically affected history, even though they are less well-known outside their lifetime.